Forth for the BBC micro:bit

There was an opportunity to have early access to a spare BBC micro:bit.

Matthias Koch took the time and effort to adapt his Mecrsip-Stellaris Forth to the BBC micro:bit hardware.

The complete Mecrisp Github File System contains many files covering the different Controllers it runs on – but which are not necessarily related to the micro:bit.

We want to make it easy to get to the stage of running the first Forth code on the micro:bit.

As result here a Starter Pack.

Suggestions to improve it are welcome.

How do you install Mecrisp onto the micro:bit?

More I/O Discussions about the micro:bit in English and as well available in German ( not including Forth but a lot of IO information ) as supporting information and part of the Forth Bookshelf is here.

Have fun trying it out and feedback for additions and improvements can be sent to Juergen Pintaske at epldfpga@aol.com

Hardware - All the bits and pieces that make up your BBC micro:bit.

All the BBC micro:bit pins

Check http://tech.microbit.org/ - Hardware designs for the BBC micro:bit - as well.

Inofficial Schematic (PDF) - no warranty for correctness and completeness.

Calliope is the German Version 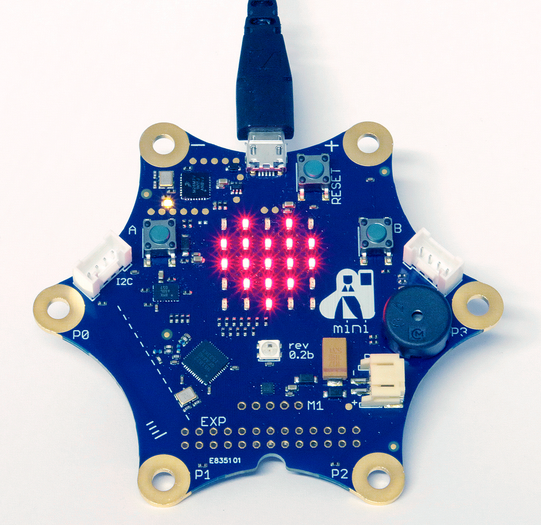 The same basic processor, and the best, the basic Mecrisp Forth Binary Matthias Koch did is identical for both systems.

Now all components are on one side, with added microphone and loudspeaker. The connector holes have been put at the end of the star shape – less risk of short circuits

2 Files as a first step on how the Calliope IO works. Thanks to Matthias Koch for the code and Carsten Strotmann for bringing a Calliope.

There is an eBook in German and English – not about Forth yet but a lot of examples and background information. And showing small examples that work in other languages, and that can be re-implemented in Forth on both boards as programming exercise.
English https://www.amazon.co.uk/BBC-Micro-Tests-Tricks-Secrets/dp/1541200721/ref=asap_bc?ie=UTF8
German https://www.amazon.de/Micro-bit-Praktikum-Burkhard-Kainka-ebook/dp/B01MQL04TB

How to Start? – Go to A Start With Forth here - most of the relevant eBook contents:
https://wiki.forth-ev.de/doku.php/en:projects:a-start-with-forth:start0

There are microbit clones around , but they are probably not compatible with the mecrisp version described here.

Enjoy these systems; how to use the Bluetooth with Forth will be shown later when there is time.