Every year the Forth Society e.V. honours an outstanding personality for his/her Forth activities. Started in 1986 as a plastic toy trophy, the SWAP-Dragon has been reborn in 1997 as a beautiful bronze sculpture.

How it all began

When the programming language Forth became publically available in the early 80s, the book Starting Forth by Leo Brodie, formerly Forth Inc., was one of the sources for beginners. It became very popular not only because of the entertaining text but also because the insightful images, that described the different system components and operators as comic figures. To explain the operator SWAP Leo Brodie used a little two-headed dragon, which is today known as the SWAP-Dragon. Below is the original comic from the first edition of Starting Forth that allowed so many of us to understand, what SWAP was supposed to do:

The word SWAP is defined to swich the order of the top two stack items. As with the other stack manipulation operators, you can test SWAP at your terminal in „calculator style“; that is, it doesn't have to be contained in a definition. - Leo Brodie in Starting Forth 1st ed, p. 44

But this is not the only reference to SWAP in Starting Forth. When SWAP sees the operator ROT, which exchanges the upper three entries of the data stack, he shivered over so much complexity:

The SWAP becomes the unofficial mascot of the FORTH society. Sometimes he appears on Forth-Shirts and on beer mugs (?) - and always in our heads.. 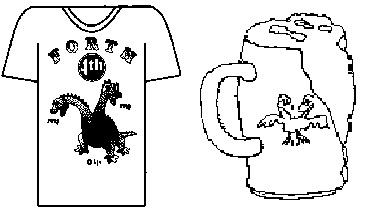 On its second yearly conference the FORTH society initiated the SWAP-Dragon prize, with which Michael Kalus was honoured for his enormous work in the early days of the Vierten Dimension, the member journal of the FORTH society. When he was presented with a little two-headed toy dragon, he was so impressed that he declared:

When this all lasts for 10 years, I will donate one made from bronze.

Although it is still unclear, what he meant with this all, it did last for more than 10 years and there are still witnesses for this amongst us.

The plastic SWAP dragon had a notable property. It smelled surprisingly of strawberries! Unfortunately we cannot show that here. (So much for multimedia

Here a photo of the plastic trophy:

Then it was realized, that it is a full task to find a person to honour – the Dragon council, consisting out of all former prize recipients was formed. They meet every year during the annual meeting of the FORTH society and deliberate over a new member to bestow the honour on. Last year’s prize winner has to contribute at least 3 serious suggestions.

When it became clear that what was meant with this all, must be older than ten years, the work on a bronze sculpture began. Rolf Kretzschmar, former editor of Vierte Dimension and sculptor, created a wonderful SWAP dragon sculpture, that happily bites into the upper stack entry. Here a photo of the SWAP dragon in bronze:

The winners of the award

Custodian of the SWAP Dragon